My husband travels quite a bit for business, but it’s usually only one or two nights once or twice a month. This past week, though, Dada went away on a week-long “man trip” to hike and mountain bike in Utah, and I was worried about how  little Tommy (23 months old) would handle it. He LOVES his time with his daddy and has certain routines that revolve around their time together, so I knew that 7 nights with just mommy would be a challenge. T will ask for Dada every night when he expects him to come home from work and then again in the morning when my husband routinely gets him out of his crib and changes his diaper while I slowly drag myself out of bed.

In an effort to help T understand that Dada was going on a trip, I brought him to the airport with me to say goodbye and send him off. I explained to him that Daddy was going on an airplane and would be home in seven days. He said his goodbyes and seemed okay with it, and I realized that he did understand that Daddy was traveling when we were out later that day and he kept pointing at airplanes in the sky and saying “Dada! Dada!”

But when we were at home later that night, he started looking around the house for Daddy and getting upset. I knew that there had to be a better way to help him understand that Dada would not be home for a few more days, but that he would indeed come home eventually. So, I decided to make a little countdown calendar. 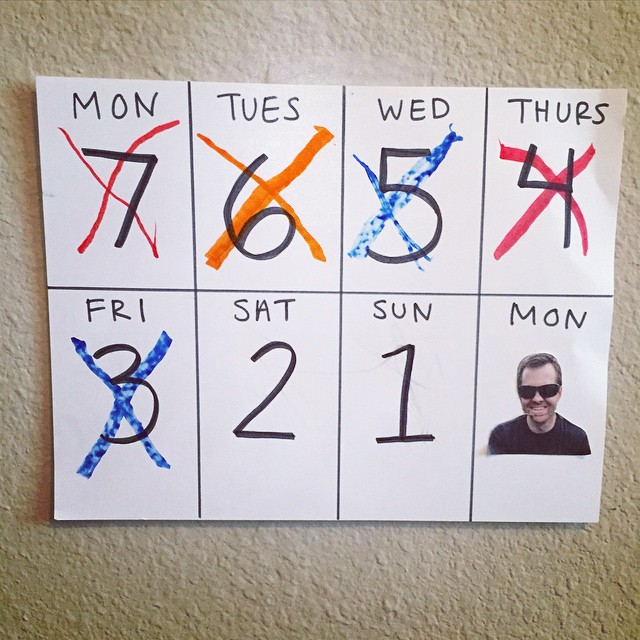 I just drew a simple calendar with the days of the week from the day Daddy left to the day that he would return (Monday through Monday). Then, rather than listing the actual date, we counted down the number of nights left until he would return. On the final day, we pasted a picture of Daddy. Then, each morning when T woke up, we would go to the calendar and put an X through the previous day. Any time during the day that Tommy asked for Dada, I would take him to the calendar and point to the number and ask him “How many more nights until Dada comes home?” and he could look at the calender and tell me.

After the second night with the countdown calendar, he understood what was going on and stopped looking for Dada at bedtime and in the morning, and instead would tell me “Dada airplane” or “Dada bye bye” or “See you soon Dada.” It made him excited to see the days getting crossed off and was a great visual to help him comprehend that each day that passed was getting closer to the day when he would get to see his daddy again. On the final day, he kept shouting “One day Dada home!” to all of our friends and neighbors.

We will definitely be doing this from now when my husband goes out of town, and it would also be a great idea if we ever get a chance to go on a getaway together and have to leave him overnight with a babysitter or relative. It could work, too, for a little one with a sibling going away for summer camp, or even to look forward to an event, like a countdown starting the week before grandma comes to visit or a birthday countdown.

Do your little ones have a hard time when a parent goes out of town? What are some tips that help you pass the days? Share in the comments!